How to Provision for the Pacific Islands 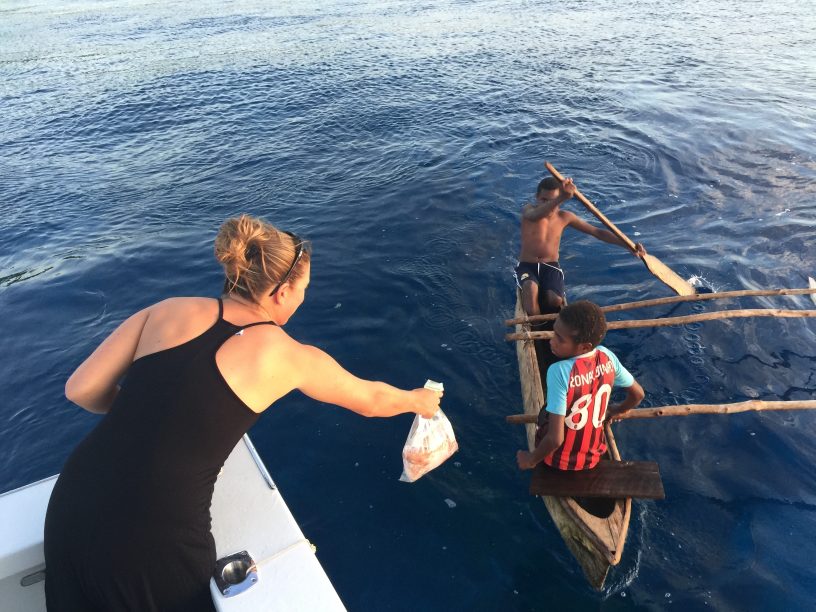 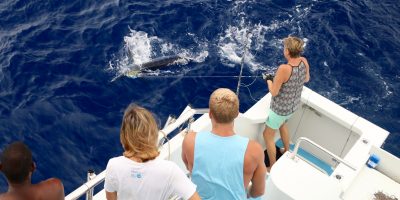 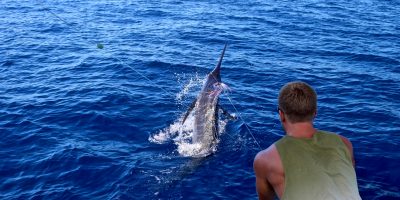 3 Days at the Sabine Shoals

Provisioning has occupied quite a bit of my time and thoughts lately.  As the chief cook and bottle washer, it’s my job to feed the finicky captain and the hard-working, calorie consuming, young crew.   In addition, we expect several groups of friends to join us over the coming months as we seek out the big fish in Vanuatu.

Endless hours of trolling can become tedious and I considered food a form of entertainment aboard November Rain.   As a former Californian, my culinary talents tend towards Mexican, Sushi, Thai and spicy Italian while my Kiwi partner’s taste is more specific; roasted meat and 3 veg,  of which 2 of the veggies MUST be potatoes.   I enjoy cooking and consider it my hobby and contribution to the boat.   Birthday celebrations bring out my creative side. 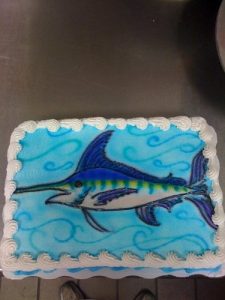 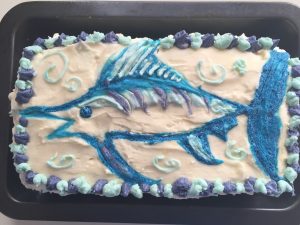 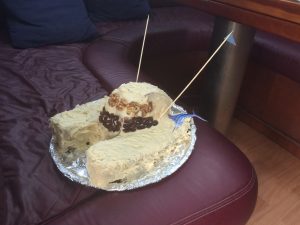 Annie’s Birthday Cake is a replica of our sport fishing cat.

Last year, while cruising Tonga, Fiji and Vanuatu, we learned a lot about what was and wasn’t available in the  local markets for fodder.  As could be expected, fresh fruit and vegetables were readily available, except for Garry’s favorites, broccoli and cauliflower.  They just don’t grow well in the warmer climates.  Potatoes, tomatoes, and carrots were cheap.  Eggs were sold in flats, so we learned to bring our own cartons to market, rather that try to carry the flats in the dingy. Rice, flour, long-life milk and coffee seemed to enjoy government price controls in Tonga.

In Tonga, the recent influx of Asian immigrants has the greatly improved the variety and quality of green produce in the markets, with beautiful heads of lettuce, spring onions, bok choy, cilantro, basil, Napa cabbage, radishes, even dill weed, alongside the more traditional fare of taro and manioc.  It was funny, but all produce was displayed in little individual piles on the  market tables, with each pile having the same value of $3.   A pile of tomatoes was the same price as a pile of cucumbers as a pile of potatoes.  If you only wanted one cuke, well, you had to commit to buy the whole pile regardless.  I might be wrong on this, but I think the local price was $1 per pile, and the price was jacked up for tourists.  After our shopping bags were filled,  and I would fork over cash in multiple of $3, more often than not, the proprietor would shove in additional bundles of vegetables in the bag at no extra charge.  Either they felt guilty for overcharging, or it was just good business to keep us coming back.  I did end up finding one particular Korean vendor where I could do one-stop vegetable shopping, and visited her stall exclusively the entire time we were in Nufu’ a lofa 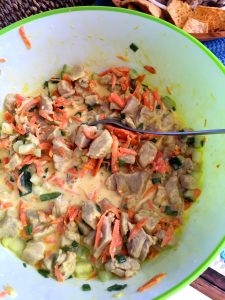 Papaya was plentiful and we actually got sick off of it, until I learned that when baked, they made a delicious squash/pumpkin alternative.  Bananas were everywhere, but the vendors encouraged purchasing the entire stalk.  But they were cheap enough, only a few bucks for 100 bananas.   They sometimes stayed green and hard for weeks, when suddenly, the entire stalk was ripe all at once, and we had bananas coming out our ears. I finally gave up on finding fresh mushrooms,  instead, dried Chinese shiitake substituted nicely. 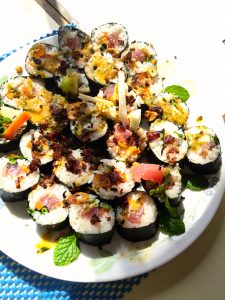 Mangos and pineapple had a very short season, making them a luxury, with prices to suit.  Imported oranges and apples from New Zealand and were sold for about a $1 each, but were very delicious, and we rarely skimped on them.   Canned and imported foods were limited to a few basics, and were very expensive.  For example,  a jar of pre-made pasta sauce was about $6.00 U.S.  Canned corned beef and tinned mackerel was on every island store shelf but we never, ever bought them and never met anyone who did.

Cheese was perhaps our biggest vice, a daily staple for Garry, and we paid dearly, about $18/kilo for Colby. Yogurt was not available, but I scored some dry yogurt powder in a Chinese store for about $9.00.  That was actually a good investment, as I began making yogurt every other day using UHT milk.  If I was lucky enough to find some exotic cheese like Parmesan,  well,  I would just buy it and close my eyes to the sticker price.

White sliced bread was available at fresh bakeries, but without preservatives, only lasted a day.  Whole wheat was not commonly found.  We ended up making a lot of our own bread with the bread maker, with flour and yeast that didn’t quite work the same way as New Zealand flour. 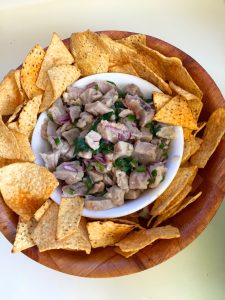 We caught Wahoo, Mahi Mahi or Tuna every day, and would only keep enough to eat, releasing the rest.  Occasionally,  we kept a fish to  trade with the villagers who would paddle out in their dug 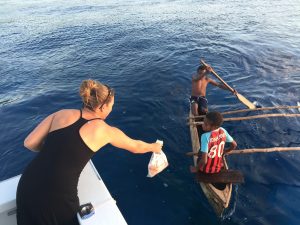 out canoes.  A nice Mahi Mahi could buy us a weeks worth of papaya, pomelo and coconuts.  We avoided eating any reef fish for fear of Cigaterra poisoning,  a common problem in Tonga and some of the other Pacific Islands.
Out of curiosity, more than need, we made it a point to scout out the local fish markets, to learn what local species were being harvested.  In Nuku’alofa, we got a distasteful lesson in ecologic genocide. We counted numerous undersized specimens of threatened species and colorful reef fish.  Sustainability aside, the fish were not iced down, and had a dubious shelf life.   Mollusks fared a bit better, as they were routinely trotted down  to be soaked in the silty harbor for recessitation.   One morning, we counted 30 blue marlin being unloaded off a Tongan long-liner,  by crane,  heads already removed, for processing and export to Japan.  Tonga had plenty of frozen meat and chicken available in chest freezers, but while being imported from New Zealand,  seem to be inferior grade.  Fortunately we had brought enough meat from NZ to last us the 3 months until we arrived in Fiji.

Fiji had great butcheries with quality vacuum packed meats,  Indian proprietors who stocked plenty of asian foods, and well stocked supermarkets.  After 3 months in Tonga, I felt like we were back in civilization, plus the fresh markets offered a nice variety of produce.  On the other hand, Savu Savu’s fish markets were downright scary.   Fish mongers would prop open rusty chest freezers to display a jumbled frozen block of unidentified species,  sporting various degrees of freezer burn.  Tonga’s fresh fish market suddenly looked good.

When we arrived in Vanuatu, we were pleasantly surprised to find an amazing  fresh market in Port Villa, and a western style supermarket that rivaled any NZ or US chain. There was an large variety of vegetables, and I was gob smacked to find raspberries.  The island of Santo grows their own world-class beef, with prices that were quite cheap.  And because of the  French influence, there is decent imported cheese! But of course,  imported staples like coffee, jam, and other canned goods are still quite dear.

This year, we decided to bring more stores with us, and not rely on the local markets for staples such as cooking oil, flour, canned goods, 3-berry jam, peanut butter, coffee and chocolate.  The dilemma becomes, does the increased weight of the food stores we carry out-weigh the increase in fuel costs that we will spend to cart it all the way to Vanuatu?  We decided to go ahead and purchase 6 months of dry goods, and store the bulk at our new house on Aore Island, then refill the galley as needed. 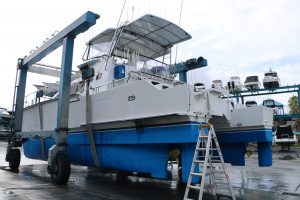 Garry and I made our big provisioning shop at Pac’n Sav,  while the boat was still on the hard last week.  This meant we had to haul 6 months worth of groceries 10 feet up the ladder to get them aboard.  Why do anything the easy way?  The dry goods have now been stowed away,  buried beneath seats,  under bunks and crammed into inaccessible cabinets.  I have a sketched a pirate map to help me find the buried treasures months from now.   There is nothing as frustrating as knowing you have 12 cans of coffee aboard somewhere, but after tearing the boat apart, you decide to become a tea drinker.  Tomorrow, we pick up the 40 kg of frozen meat from the Mad Butcher, then shoot over to Countdown for the fresh produce and dairy before heading to the boat for our departure to Vanuatu the following day.

Now, what am I going to cook for dinner?  Where’s the mushrooms?  I know I have a case of them somewhere.

3 Days at the Sabine Shoals

This site uses Akismet to reduce spam. Learn how your comment data is processed.