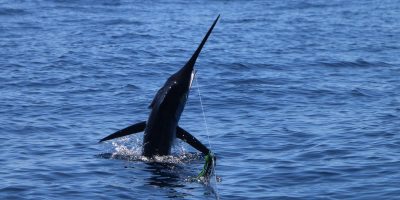 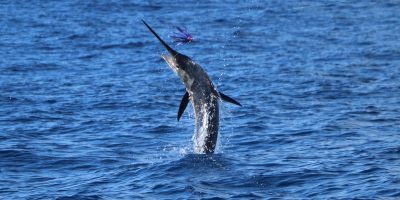 Dolphins, Rainbows and Unicorns…A Princess Diary of The Whanganella Banks 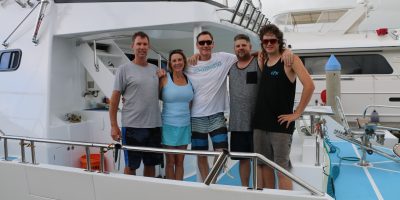 Across The Ditch, Oz to New Zealand

We just got back from another three days of fishing off of Espirtu Santo, Vanuatu and we had a blast doing different styles of angling . We had successes with jigging,  popping, trolling with rapalas and divers, strip baits and of course, our usual trolling big game lures for marlin.

Jonas, our German deckhand, had recently returned to Vanuatu after 2 months of independent traveling and surfing through Indonesian with his lovely French girlfriend, Laetitia. The pair will stay with us, until Laetitia flies to NZ at the end of November. Jonas plans on staying a bit longer, helping us crew November Rain to New Caledonia, and then on to New Zealand.

Jonas was anxious to share his love of game fishing with Laetitia, yet concerned about the very real possibility of her being seasick, especially since she reported that she often gets car-sick. Garry zeroed in on a few days with really  calm weather patterns (to minimize the risk of a vomitorium) and the four of us headed out for a 3 day fishing trip. (Laetitia was dosed up with Pahia Bombs, a  NZ pharmacy secret-formula of non-sedating seasickness medication). We were joined by Leon, our Ni-Van gardener and all-around handyman who really deserved a rest from building a rock sea wall on our property. It turns out that Leon is a fully qualified mariner, certified to work on a cargo ship, having attended a program at the Luganville Maritime school. He was very excited about three days of fishing with us. 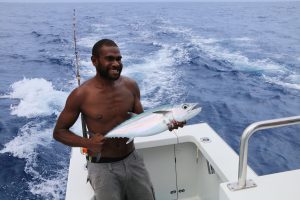 Leon after hauling in a bait

At 6 am, we threw off the mooring lines and headed off for Pasco Bank to try our luck with trolling lures. We had a couple of hits by Mahi-Mahi early in the morning, but they fell off before we could get them to the boat. It was good practice, though, to help our two newbies get used to the craziness that happens when a fish comes in the gear; clearing all the other lines, getting the bucket and belt on the angler, pull up the mudflap dredge, etc. 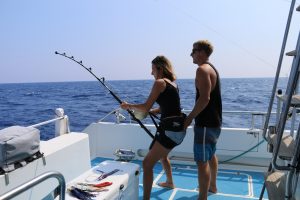 Laetitia on stand-up with blue marlin

Laetitia was on placed on the rod for the first marlin, in stand-up gear, with Jonas behind her, supporting and coaching in English and French. Garry was coaching Jonas on coaching Laetitia from the fly bridge. Fortunately for Garry and I, neither of us speak French, so we didn’t understand Laetitia’s complaints about the torture she was enduring from the monster on the line. In the end, was only about a 30 minute battle to pull the fish alongside the boat. We estimate it was about 80-90 kg blue, which was quickly released after photos. 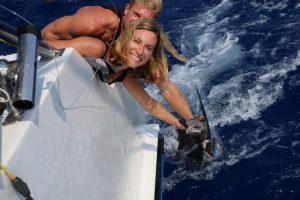 The first night, we anchored at Tasariki. We had arrived just before dusk, so Jonas and Laetitia jumped in for a brief snorkel. They were impressed by the size of the large fish just under the boat. Garry hooked and released a nice red bass on a strip bait, but as soon as dark hit, only sharks heard the dinner bell. While they were fun to catch, they were quickly released, only to return for a second helping of skippy tartar . 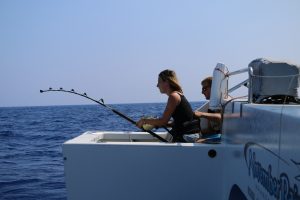 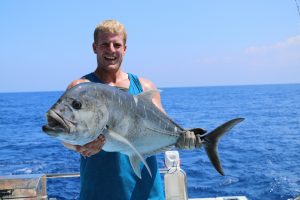 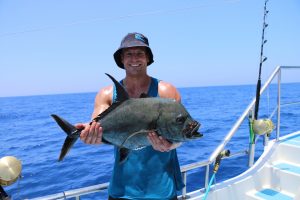 The following morning, we headed out to Wusi, our usual go-to spot for marlin. However, since we couldn’t find any bait or birds working, we decided to concentrate on jigging. Garry had a couple of marks he wanted to fish, and once we arrived, the fish finder confirmed signs of life. Jonas managed his to bring in his first GT in 100 meters of water. 10 minutes later, he pulled up a smaller black GT. We also pulled in a beautiful red coral trout, but unfortunately, it was too bloated from the rapid ascent to make it back down. We ended up scooping it back aboard and poking a hole to release the air from it’s belly, but in the end, it went in the bait bucket for later use. 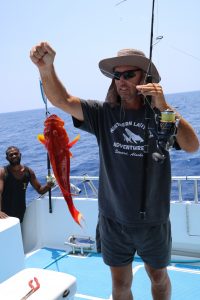 Garry, (wearing hat made by his mum) jigs up a coral trout 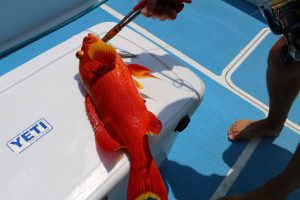 We anchored off of Wusi for the night, then left for the Sabine Shoals at 4 am the next morning. The Shoals is about 50 miles off the west coast of Santo Island, and is a high spot where the ocean floor rises from a depth of 2000 meters up to a high spot of about 2 meters. It is miles from nowhere and offers no shelter from bad weather, so is rarely fished, and thus pristine  grounds for a variety of species.

We had been to the Sabine Shoals twice before and had great luck with rapalas and divers, snagging wahoo, barracuda and dog-tooth tuna. When we arrived, we spotted a charter boat, with spear divers in the water.  It was like Queen Street at peak hour to have two boats on this remote shoal. We knew the other skipper, and Garry and Mike exchanged pleasantries over the VHF.  Mike reported that his charter guests had managed to spear a 50 kg doggie that morning and get it aboard the boat before it got sharked. 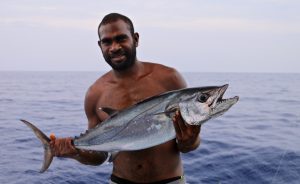 Leon with a dog-tooth tuna

We had a another great day ourselves, and managed at least a dozen small doggies, throwing most of them back to catch another day. (We did kept a few, to donate to the villagers at Tasariki). Garry hooked into a couple of monsters, and unfortunately, lost both fish as well as the jigs. Laetitia also had a big one, which straightened out the split ring on the 37 kg braid rig, resulting in a lost fish. We are going to have to beef up our jigging rigs to handle these  exceptionally big guys.

In the excitement over Laetitia’s fish, we forgot to wind in one of the outrigger lines, which wrapped around the starboard prop when Garry drove the boat forward to pull the fish away from the reef.  Jonas was “volunteered” to go for a swim and cut the nylon away from the prop. As soon as he was finished, he rocketed back into the boat, whining about the 20+ sharks watching him do the job. 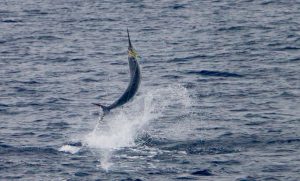 We also managed to catch a half-dozen wahoo, but they were on the smaller side of what we had caught previously at the shoals. On the up side, we managed to only lose one-half of one fish to a shark, improving on our shark loss ratio. (The wahoo were filleted and later smoked back at the house). As we left the shoals and headed for Tasariki, we had a marlin hit on the Pakula Smokin Joe lure. We watched as the fish leapt out and shook off the lure.

A side-track about the Pakula  Original Smoking Joe… It was our top lure in the spread last year in Vanuatu. Eventually the soft head split due to the abuses of big-girl marlins. Gaz had actually duct taped up the split head just to keep it going. The Original Smokin Joe has been out of production for a few years now, but we managed to find a new, albeit, very dusty one in a Port Vila tackle shop. (Just goes to show you how old the inventory is in Vanuatu). The new one has different colors but seems to be just as effective as our now retired lure, may it R.I.P. 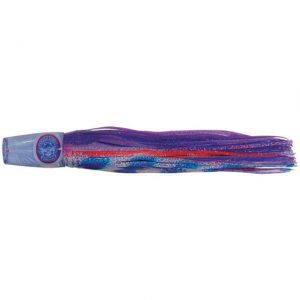 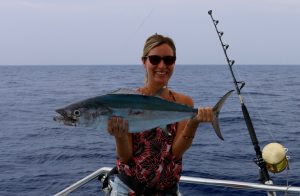 Laetitia with a small doggie

The next day, as we headed for home, we ran across another blue marlin right off of Tasariki. This time, the hook stuck and Jonas brought the smallish fish boat side after a short fight and a rather dazzling aerobatic show. We estimated this fish at 60 kgs, one of the smaller ones we have seen. 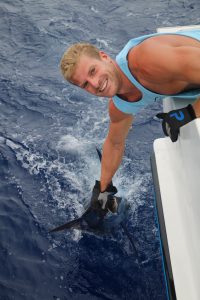 Jonas gets ready to release his marlin

Perhaps the highlight of the trip was spotting six giant manta rays glide  under water, jut beyond the transom. They looked eerily like stealth bombers in perfect wing-to-wing formation. Jonas quickly donned a mask and snorkel, jumping in after them, swimming behind, until they were gone. He was so excited to check off a another bucket list item. That’s is really what this is all about.  Bucket Lists….

Dolphins, Rainbows and Unicorns…A Princess Diary of The Whanganella Banks

Across The Ditch, Oz to New Zealand

This site uses Akismet to reduce spam. Learn how your comment data is processed.